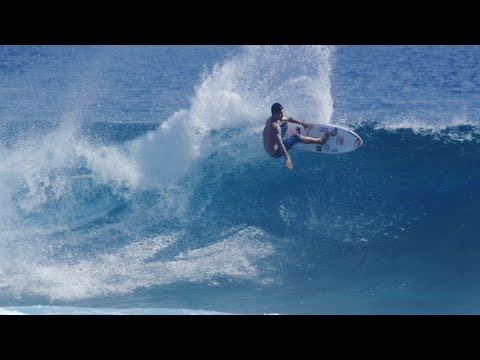 The 2017 Outerknown Fiji Pro Warm-Ups from Stab Magazine surf videos. Sunrise Cloudbreak was barely topping the shoulders, by evening it was consistent overhead. For most, today was the first opportunity to stretch the legs. The few that arrived earlier, like Jack Freestone, had been grounded by flat conditions and were forced to share the first of the energy with the rest of the tour who sailed in before noon. It was a competitive lineup throughout the day and the goofy-footers appeared to have considerable advantage in the quick, textured conditions. Sitting up the point were Gabriel Medina, Owen Wright, Nat Young and Matt Wilkinson who attacked the feathering walls at pace, Glenn ‘Micro’ Hall took the same approach and sold us his twin fin, freesurf dream while injury wildcard, Yago Dora made his fresh presence more than felt. From the natural footer’s corner, Frederico Morais, Conner Coffin, Jack Freestone, Bede Durbidge, Steph Gilmore and Stu Kennedy all found opportunity to utilise rail in the onshore breeze. Back from recent injury, Italo Ferreira got busy resuming his campaign, while Tatiana Weston-Webb and Courtney Conlogue prepped for their final showdown.